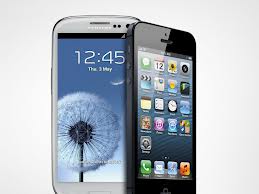 In the evolution of Smartphones it will be interesting to see where things go.

I’m not talking about the Samsung/Apple battle that’s raging in the online commentverse.

Being in the communications and online video industry the increasing screen size is great news. It isn’t news that video viewing on mobile is exploding. But I wonder where video size and phone function begin to diverge.

I heard a couple of teenagers talking yesterday about the iPhone 5. They were both sticking with the 4S. The reason? It’s because of the screen size. The new one is too big – doesn’t fit in the front pocket of their low rise jeans. That’s a major problem. Everyone knows that teenagers will watch video on any and every screen size that’s out there, iPhone 4S size to IMAX. So I’m not worried about their screen size preference. I myself do sometimes miss the old flip phone for its convenience with making calls and talking.

Coming in at 4.8 inches there’s the Samsung Galaxy S III. The new iPhone 5 plays catch up on screen size hitting the tape at 4 inches. As sure as this generation of teenagers is taller than my own, the next Samsung Galaxy will significantly outpace the iPhone at 5 inches.

Despite concern about the size of the iPhone 5 screen, Samsung’s “The next big thing…” ad campaign, and the general word on the street that the 5 lacks innovation, the 5 is shattering iPhone sales records and pushing Apple’s stock price to $700. But there’s more to the discussion about screen size than just phone sales, as this report profiled by Will Richmond at VideoNuze demonstrates.

We’ll see how Apple’s Smartphone market share does, and if there’s a smaller screen in the future for those of us with good eyes and small pockets.